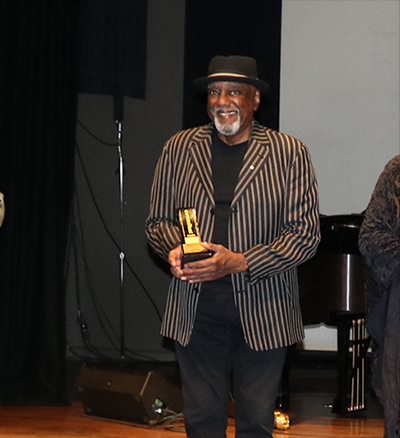 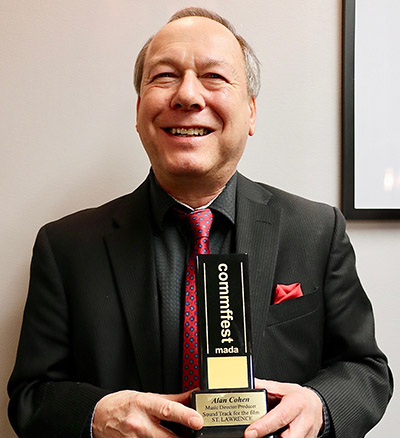 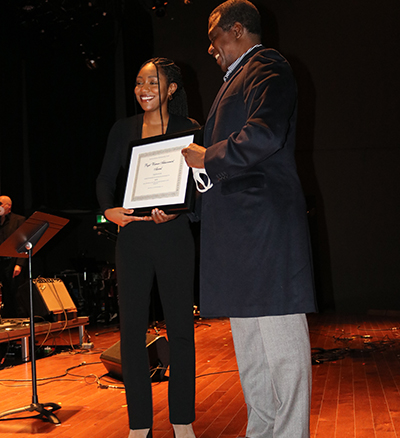 Jackie Richardson CM is a Canadian singer and actress. Richardson is known for her screen roles in Turning to Stone, The Gospel According to the Blues, The Doodlebops, and Sins of the Father. She is also known for her appearance on the YTV show Catwalk where she played the grandmother to Atlas.Jckie received the Commffest MADA AWARD for lifetime Achievement In Music November 2021 at The St. Lawrence Centre for The Arts.

Richardson was a member of 1960s Toronto-based girl group The Tiaras along with Brenda Russell, Arlene Trotman, and Colina Phillips.

Richardson is a three-time nominee for the Academy of Canadian Cinema and Television Gemini Award, and won the Gemini Award for Best Performance by an Actress in a Leading Role in a Dramatic Program or Mini-Series for The Gospel According to the Blues. In 2003 she was nominated for the NAACP Image Award for Best Actress in a Television Movie for Sins of the Father. Richardson is also a noted stage performer, winning a Dora Award in 2004 for the musical Cookin' at the Cookery.

For more than five decades Joe Sealy has enjoyed a successful career as a musician, actor, composer, music director and recording artist. Tours have also played a significant part in Joe’s career. Some of the more notable ones include:

6 months on the road with Blood, Sweat and Tears;
19 concert tour of Africville Suite(including an appearance at the Canadian Embassy in Washington, D.C.);
20 city national tour of Timothy Findlay’s Piano Man’s Daughter(along with Veronica Tennant and Sylvia Tyson);
2 week tour of Norway and Denmark including a performance at the world famous Jazz House in Copenhagen.
Joe was awarded the COMMFFEST MADA AWARD for lifetime Achievement In Music November 2021 at The St. Lawrence Centre for The Arts

As a professional pianist, bandleader, accompanist, arranger, music producer and most recently soundtrack composer (film: St. Lawrence), Alan has performed extensively throughout North America, from Arizona to Alaska, and played in every province across Canada. Leader of The Alan Cohen Orchestra (Imperial Room, Harbour Castle Hotel, Old Mill); Musical Director and resident pianist for over eight years at the Fairmont Royal York. Performer and Musical Director for Commffest music events at St. Lawrence Centre for The Arts in 2021 and 2022. As an established solo pianist and vocalist, Alan’s versatile repertoire covers jazz and blues to R & B, but he admits he has a soft spot for those standards known as “saloon tunes”.

Alan recently completed his third year of a weekly residency as Musical Director and pianist at Bindia Lounge (Bindia Indian Restaurant) in Toronto where he has been performing alongside some of Toronto’s finest musicians and vocalists.
Alan is a proud member of the American Federation of Musicians’ Canada for over 50 years and also a Lifetime Member or the Toronto Musicians’ Association.

Canadian born Sagèlee Archer has been honing in on her career for the past 10 years. Born in Mississauga, she's had time to establish a unique aura of musical inspirations. Her influences vary from Lauryn Hill, John Mayer and Maxwell; to Janet Jackson, Luther Vandrose and Prince. Blending soul infused lyrics, old school instrumentation & pop hooks she intertwines the conscious with the current.

She studied at Metalworks Institute finishing the Performance Program for guitar in 2017. Shortly after finishing, she began her start in publishing doing Online Licensing for CMRRA. In 2018 she released her first single Man Up (Love Me) and since then has release two other singles. In 2019 she took part in Honey Jam and in 2020 she founded Ehtribe, a company dedicated to showcasing Canadian Artists.

She's currently focusing her energy on releasing her debut Ep.
From 2018 to now she’s released a couple of singles and took part in Honey Jam 2019.  Sagèlee is currently preparing for her debut Ep.